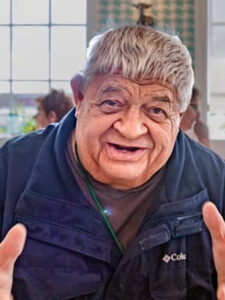 From time to time, the board of governors of the Religion Communicators Council (RCC) confers a special Wilbur Award to a person or organization whose body of work makes a substantial and unique contribution to public discourse on religious faith and values or interfaith dialogue and understanding.

As a master storyteller who sees the image of God in every person, Dennis C. Benson has interviewed more than 15,000 people from Alice Cooper and Fred Rodgers to ordinary people for radio and TV – over a span of six decades. In the process, he inspires other people of faith to do the same.

“Dennis is a real pioneer who paved the way for many of us,” recalls RCC member, Roy Lloyd. He remembers Dennis asking him to take over a radio show with teenagers in Pittsburgh about current music and their values. Lloyd later worked in media for the National Council of Churches and American Bible Society in New York City and stated that “It never would have happened if it weren’t for Dennis Benson.”

Benson hosted award-winning radio and television talk shows for 20 years on KQV and sister radio station WDVE-FM, Pittsburgh’s leading rock station, and PBS station WQED-TV, where young people shared the challenges they were facing. He was the producer of the “Passages” radio program for Presbyterian Media Mission for more than 30 years.

Over his lifetime, Benson, a retired Presbyterian minister, has been a chaplain, the author of 22 non-fiction books, the producer of 60 experiential audio/video courses for group learning and authored over a hundred articles on youth work and education.

Benson excels in his work to transform secular culture and media platforms into vehicles of care and hope, using social media to regularly feature stories of the people he meets, including on Facebook and elsewhere.

The special Wilbur Award will be presented during the annual 2021 VIRTUAL convention http://www.rcconvention.org on Friday, April 9th between 7-9 PM.

The Religion Communicators Council has presented Wilbur Awards annually since 1949. They honor excellence by individuals in secular media – print and online journalism, book publishing, broadcasting, and motion pictures – in communicating religious issues, values and themes. The award is named for the late Marvin C. Wilbur, a pioneer in religious public relations and longtime council leader.

END_OF_DOCUMENT_TOKEN_TO_BE_REPLACED

This is for a phone survey. Enter the member's ID and answers.

END_OF_DOCUMENT_TOKEN_TO_BE_REPLACED

By Kevin P Kane, APR This feature was originally published in The Pinnacle by the Public Relations Society of America, July 16, 2021, Volume 1, Issue 4. RCC is one of eight professional organizations represented on the Universal Accreditation Board that administers...